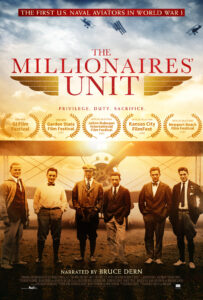 Welcome to the web site dedicated to the First Yale Unit and the documentary film, The Millionaires’ Unit – The First U.S. Naval Aviators in World War I. The Millionaires’ Unit is the story of a privileged group of college students from Yale who formed a private air militia in preparation for America’s entry into World War One.  Known as the First Yale Unit, and dubbed ‘the millionaires’ unit’ by the New York press, they became the founding squadron of the U.S. Naval Air Reserve and were the first to fly for the United States in the Great War.

Using the words of these pioneer aviators from their letters and diaries, the documentary tells the story of young men coming of age as America was coming of age as a world power. Their service and sacrifice is the great untold story of American aviation in World War One. 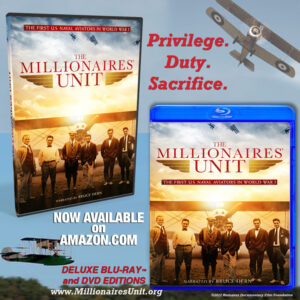 This deluxe edition, 2 DVD set or Blu-ray™ (requires Blu-ray™ player) contains the original 2-hour feature and an additional disc containing an hour of bonus material including four supplementary featurettes: From Sea Legs to Navy Wings —The Birth of U.S. Naval Aviation Killingholme: Hunting the German U-boat, Flying the Sopwith Camel and The Making of The Millionaires’ Unit. Plus, the original trailer and an eight-page booklet containing an appreciation by Marc Wortman, author of the book that inspired the film, The Millionaires’ Unit (ISBN 1586484443)

Narrated by Oscar®-nominated actor Bruce Dern, grand-nephew of one of the pilots, this documentary epic was filmed in England, France and Belgium and along the Eastern Seaboard

An intimate, character-driven story set in the historical context of …the birth of naval aviation, and the drama and tragedy of the First World War — G.I. Film Festival